Covered with masks and visors to avoid complications from the ash from the Sangay volcano that fell this Thursday in ten Chimborazo cantons, this Friday morning hundreds of citizens with brooms and shovels held a minga to clean the volcanic material from streets, avenues, sidewalks , patios, roofs and homes. 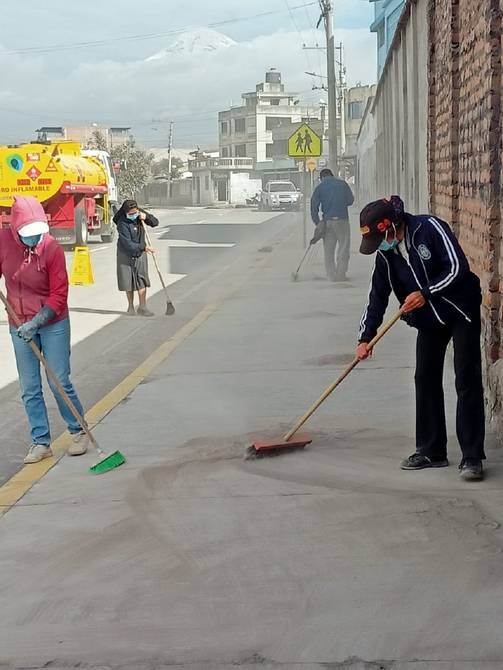 Luisa Loza, governor of Chimborazo, commented that due to the permanent activity of the volcano, the yellow alert is maintained in the province. In addition, he said, the contingency plan that they have had since September of the previous year, when the first event (of ash fall) was registered, is also executed.

Through telephone contact with this newspaper, the also president of the provincial Emergency Operations Committee (COE), indicated that on Thursday measures were adopted such as the suspension of the activities of the public and private sectors, in order to protect health of the population and prevent the local health system from being overcrowded considering that due to the COVID-19 pandemic it works at full capacity.

He said that public activities were suspended this Friday, that the servers for about two hours joined the minga in their institutions after which they retired to their homes. Meanwhile, he said, the private sector was urged to join in depending on the reality of each company.

He commented that of the ten cantons of Chimborazo; Riobamba, Guano and Chambo were the most affected by the ashfall. The work tables, he added, identified the needs and the Ministry of Agriculture and Livestock (MAG) began with the delivery of food for the animals.

This, taking into account that the main activities of the population of the province are agriculture and livestock, which has been affected by around 60%.

Loza reported that the provincial COE declared the agricultural sector an emergency, that each cantonal COE has the power to do the same according to the reality they live because the response capacity to address the affectation exceeds the capacity that exists, for example, in small cantons like Chambo and that there you have to resort to so that the needs are met through the provincial and national governments.

The governor of Chimborazo indicated that according to the information report released by the MAG, there is an approximate 368 hectares of total loss of crops, as well as 128,000 animals affected by the ash fall.

In an interview with Ecuavisa, Rommel Salazar, director of the National Risk and Emergency Management Service, indicated that adding the damage caused by the rains, Chimborazo has 28,000 families, 40,000 hectares and 16,000 affected animals.

The National Government mobilized six mobile veterinary clinics apart from those set up by the provincial government to meet some of the requirements of livestock, while out of solidarity from provinces such as Los Ríos, El Oro and Guayas rejected bananas arrived to provide them with food.