The National Assembly approved today, Thursday, August 27, 2020, a resolution in which it censures former legislator Daniel Mendoza , demands the departure of the Minister of Government, María Paula Romo , and the reconformation of the Supervision Commission. 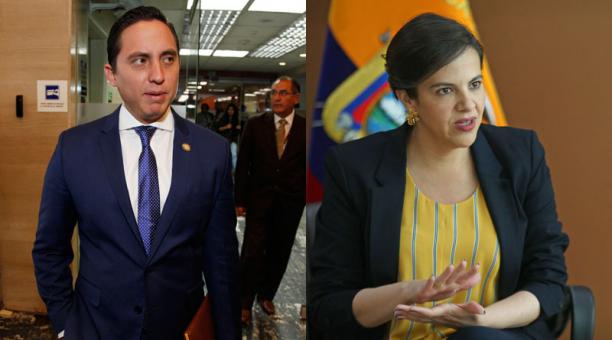 The motion obtained 123 votes in favor, and 1 abstention, and was presented by Assemblyman Héctor Yépez (I believe). As soon as the vote was given, the first vice president César Solórzano , in charge of the session, suspended the day.

Before the approval of the document , there was a debate in which 16 legislators from different benches participated, including two from the ruling party.

The president of the Multiparty Commission, Xavier Casanova (AP), stated that during the investigation an unjustified increase in the patrimony of Mendoza was evidenced, who has been detained for alleged organized crime since June 5.

Despite the fact that Mendoza resigned from his post on July 1, in the middle of the disciplinary process , Casanova called on the Plenary to apply a public censure for the former legislator for incurring in several law prohibitions .

However, Assemblyman Héctor Yépez (I think), another of the members, went further and proposed that the Assembly demand that President Lenín Moreno remove the Minister of Government, María Paula Romo.

Yépez had the backing of Ronny Aleaga and Verónica Guevara, from Correísmo. The latter presented a video and alluded to the fact that Romo in an appearance at the Commission acknowledged having received suggestions for names for public positions.

In addition, Yépez demanded that the president of the Assembly, César Litardo (AP), that within 48 hours, summon the CAL and process the requests for political trials. And that the Prosecutor’s Office investigate all those involved in the Government, Assembly and other public institutions and the private sector, on the scandals in public health.

The Social Christian Henry Cucalón argued that there is an “inescapable political responsibility of the Government” that allowed a distribution of the management of hospitals.

Marcelo Simbaña (I think) asked that the assembly members alluded to in the complaints “step aside”, that Romo be politically prosecuted and that the Supervisory Commission be restructured .

Roberto Gómez (exCreo) called the Plenary to “rattle the cat” and blamed Romo for the cast. He asked legislators not to be complicit.

Tanlly Vera (I think), one of the complainants against Mendoza, criticized that the Assembly took almost two months to debate the report of the Multiparty Commission on Daniel Mendoza.

The criticisms were joined by Mae Montaño (exCreo), who said that this shows that “there is no political will of the president of the Assembly, César Litardo, to carry out the true purification ” of this function.

Montaño recalled that three months have passed since Mendoza was detained for investigations for alleged organized crime. He pointed out that if this case is taken as a reference, the Assembly would take 210 months to investigate about 70 legislators who, according to his calculations, are facing legal proceedings.

For this reason, the legislator demanded that an occasional commission be formed “to be in charge of investigating all these cases in a single package,” among which are some members of the Audit Commission.

Javier Cadena, a member of the PSC, joined that request , who said that it is not about looking for scapegoats, but about continuing with the purification.

“If this Assembly does not have the capacity to purify itself, it is better for this Assembly to close,” said the Social Christian César Rohón, who insisted that the Audit Commission, of which Mendoza was a part, be reorganized.

Rohón considered that the Assembly should ask the Prosecutor’s Office for a report on the legislators facing judicial processes . “Nobody is absolutely above the Law.”

For their part, the vice president of the Assembly, César Solórzano (PSP), and Jimmy Candell (IND), one of the members of the Audit Office, rejected a publication of the La Posta digital portal in which they were referred to as part of the distribution of hospitals.

“I am surprised, upset, indignant (…). How easily the honor of the people is damaged , without having anything to do or watch in this funeral. This error has to be corrected ”, emphasized Solórzano.

Candell, for his part, said that he will take the legal actions that correspond to what he described as “infamies.” He rejected that accusations be launched, without verifying the information and giving credibility to those involved in criminal acts.

The legislator commented that he was part of a subcommittee that determined that the Comptroller, the Cpccs and the Sercop did not address the complaints about irregularities in the contract for USD 16 million for the construction of the basic hospital in Pedernales, for which Mendoza is detained .

Likewise, Rosa Orellana (AP) stated that she is willing to go to the Prosecutor’s Office to disprove the accusations against her and rejected “yellow journalism.” “I have nothing to do with the distribution of hospitals, because I don’t play with people’s health.”

For his part, the independent Raúl Tello said he had “fought directly and directly” against Mendoza while he was serving as an assemblyman, for which he rejected any link with him. “I am not afraid of him because he has never had a personal conversation with me … He tries to point me out in his filthy business”

Tello said he was willing to submit to a polygraph test and submit “to all the investigations that have been and are pending” to deny that he was involved in illegal acts.

In addition, legislator Tello and Mae Montaño, members of the Citizen Participation Commission , also called on Litardo to “unfreeze” the debate on the Domain Extinction Law . Fabricio Villamar (exCreo), proponent of the project, also made this request.

Villamar lashed out that 10 months ago he presented a request to investigate Karina Arteaga (AP), without so far the formation of a multiparty commission has been completed in plenary.

The text of the resolution states:

Article 1.- APPROVE the commission’s report and CENSOR Former Assemblyman Daniel Mendoza Arévalo as he is subject to the prohibitions established in paragraphs 2, 3 and 4 of article 163 of the Organic Law of the Legislative Function during the exercise of his office.

Article 2.- DEMAND the President of the Republic, Lenín Moreno Garcés, the removal of the Minister of Government María Paula Romo, for having recognized during her appearance in the Multiparty Commission that she had received suggestions of names from the former assembly member under investigation, which were later appointed to hold public office.

Article 3.- DEMAND the President of the National Assembly, César Litardo Caicedo, to summon the CAL within a period of forty-eight hours and process the Political Trial requests that have been presented and are pending qualification by the Legislative Administration Council.

Article 4.- DEMAND the State Attorney General’s Office to investigate and prosecute all those involved in the National Government, the National Assembly, other public institutions and the private sector, regarding scandals in public health, for which all acted by the investigative commission.

Article 5.- TO PROVIDE the President of the National Assembly, Assemblyman César Litardo, that in the next Plenary Session No. 681, immediately after this, include as point two of the Agenda, the change of the members of the Political Oversight and Control Commission.