Assembly could expand requirements for companies to cut hours 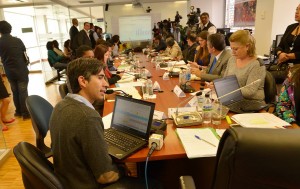 On Friday and Saturday this week, the Committee on Rights of Workers of the Assembly will adopt the report of the first debate of the bill as a matter of economic urgency called Organic Law for the optimization of the workday and Unemployment Insurance.

The Commission met yesterday to start the analysis of the Executive initiative, that raises the reduction of working hours and the creation of an unemployment insurance, among other issues.

Its president, Marllely Vásconez (AP), said that the requirements for companies to reduce working hours from eight to six hours could be extended after the debate.