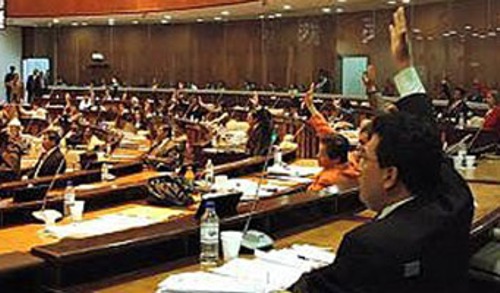 Legislators from different political parties in Ecuador gathered yesterday at the Assembly to discuss the problem of Ecuadorian cables by Wikileaks. The opposition parties wanted to set up a commission to investigate these data; however PAIS did not allowed it.

Fernando Bustamante from PAIS party and former Government Minister, proposed to fully adopt a resolution to support the Government’s decision in the U.S. Ambassador case because her allegations were against de dignity of the country, they stated. After 3 hours, 54 officers approved the text.

Luis Almeida (PSP), scolded Bustamante asking if he had “feelings of guilt” for dismissed six Generals to “appoint such an immoral person” (Jaime Hurtado) as commander of the police. According to Wikileaks, the Ecuadorian president, Rafael Correa, allowed the appointment of stolen, knowing he was involved in corruption. “Nobody wants to take over of the appointment of Hurtado, no one answers, no one says anything,” confirmed Fausto Cobo (PSP).

Assemblyman Vincente Taiano (Prian party) labeled the expulsion of the ambassador as exaggerated as highlighting the risks that it makes friction with the United States: “When President Correa sued two journalists his honor was quoted at $ 10 million, when he sued a newspaper, it was 80 million, and now his honor is going to cost millions of jobs,” alleged him referring to the non-renewal of preferences tariff  (ATPDEA).

About that topic, Linder Altafuya (MPD) questioned that the biggest concern of Chancellor Ricardo Patiño is not about ATPDEA, but the honor of the Ecuadorian president.  The ruling party through Pedro de la Cruz, Virgilio Hernandez and Maria Augusta Calle, managed the same speech: the expulsion of the ambassador is an issue of sovereignty and national dignity.