Assembly is ready to conclude the 15 pending laws of 2014 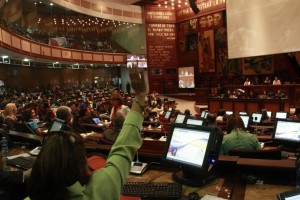 The Assembly returns this March 5 from its first annual recess and the majority bloc of the Alianza PAIS (AP) party expects to process in the remainder of the year fifteen laws that were left pending in 2014 with an approval schedule that will be defined in these days.

Among the pending laws are those of Lands, Human Mobility, Management and Land Use, Special Regime of Galápagos, Ombudsman, Reform to the Organic Law of the Legislative Branch, Intercultural Education and others.

Among the still missing codes there are the Process code, which will be processed in second debate next Tuesday; the Environment code, of which a report is being prepared for first debate; the Health code, which also has pending a report for first reading; and the Social Economy of the Knowledge code, that has not entered the Assembly so far.

About the new Labour Code that was part of the 2014 list, by decision of the AP block, the process of some reforms is prioritized with the Bill Labor Justice, which also raises reforms to other of the fifteen laws comprised the previous year: the Social Security Law.