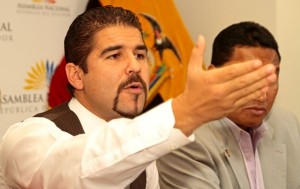 The Assemblyman of the extinct Roldosista Ecuadorian Party (PRE for its Spanish acronym), Abdalá Bucaram Pulley, resigned on December 1 to his office in the National Assembly. There are “too many anomalies in the Assembly. I can not be part of them, who are immoral,” he said.

He did not want to be “an accomplice of the National Assembly that lowers his head and complies with the provisions of the Executivebranch.” He neither wanted to legitimize the indefinite reelection of the president and popular election officials, with his vote.

The son of the former President of the Republic, Abdalá Bucaram, and opposition politician, said he does not cling to the office of legislator, not even for the salary he receives, although he needs it to maintain his four children. “How many assemblymen would dare to resign as I did,” he asked.