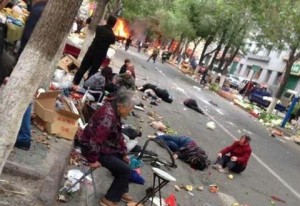 31 dead and over 90 injured was the balance left by an explosion in a market of the Xinjiang region capital in northwest China, according to Chinese state media.

The official news agency, Xinhua, reported that the attack occurred when two all-terrain vehicles crashed into a barrier first and then fired against a group of people at the Urumqi market near Renmin Park.

Witnesses said the explosives were thrown from the vehicles and up to a dozen of “big explosions” were heard. Furthermore, one of the vehicles exploded too, the agency added.

At the time, the police keeps the area cordoned off and the injured have been transferred to a hospital near the scene of the incident.

For his part, the Chinese President Xi Jinping, has vowed “to severely punish terrorists” that caused the attack.