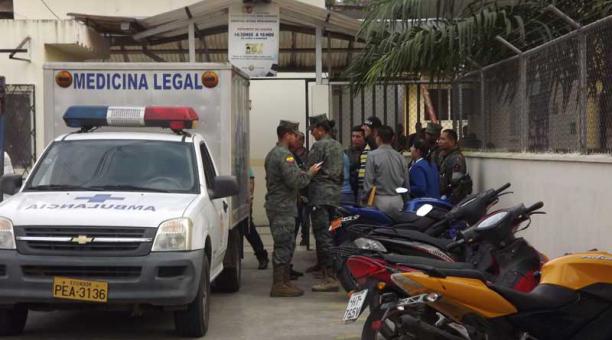 The violence that shakes Esmeraldas claimed its first mortal victims. It is about three Navy infantrymen: Luis Alfredo Mosquera, Jairon Sandoval and Sergio Jordan Cedeño. The soldiers died after an attack with an artisanal explosive that was placed on the side of the road that leads to the town of Mataje, 10 minutes from San Lorenzo, the cantonal capital.

The incident occurred when the soldiers were traveling aboard a patrol. Seven other sailors were injured. One of them is in critical condition. His legs were amputated and he lost “a lot of blood,” said Édgar Cadena, director of the Military Hospital of Quito, where he was airlifted.

The Minister of Defense, Patricio Pazmiño, had said that “new attacks cannot be ruled out.” And he said that the Unified Command, integrated by the Armed Forces. and the Police, works with Intelligence information “so that (these facts) will not happen again”. Since January 27, when a car bomb exploded in the San Lorenzo Police Command, there have been seven attacks that have left three dead and wounded police and military personnel.

These facts have forced the inhabitants of the town El Pan to leave their homes and move to San Lorenzo, where there is a greater presence of uniformed. César Navas, Minister of the Interior, assures that these attacks are a response to the operations being carried out on the northern border, especially to attack the trafficking of drugs and chemical precursors.

“As we are controlling the border, we are affecting the interests of these international criminal groups, which is why this reaction exists,” said the Minister. Navas said that security in San Lorenzo had been “reinforced.” “But beyond that we provide security to the entire northern border. So far they have seized 7.5 tons of chemical precursors, giving an economic blow of USD 600 million to criminal organizations. The bodies of the three deceased uniformed were taken to the morgue of Esmeraldas, where the autopsy was performed.

The wounded recover in the Hospital Fiscomisional Divina Providencia, in San Lorenzo. This health house is guarded by the military. Relatives of the wounded are already there. Prosecutors Gorky Ortiz and Carmen Timarán began the investigations under the direction of provincial prosecutor Janina Villagómez. This new event once again alerted the inhabitants of San Lorenzo, who arrived at the hospital after the sound of ambulance sirens at around 1:00 p.m. On the outskirts of the house of Health dozens of people crowded when they found out what happened. Everyone wanted to know what was happening.

A block from the hospital was cordoned off by police while the wounded soldiers arrived. In the afternoon the tension subsided, but among the comrades of the deceased soldiers there was sadness, while the bodies waited outside the morgue. It is unfortunate what is happening in San Lorenzo, “said one of the women who came to observe the transfer of the bodies from San Lorenzo to Esmeraldas. After this fact, the Colombian president, Juan Manuel Santos, requested this Tuesday, March 20, 2018, his Minister of Defense, Luis Carlos Villegas, to convene the Binational Border Commission.

This instance, also called Combifron, is the body responsible for security and cooperation issues in the border areas between Colombia and Ecuador. The Colombian President, who is visiting Brazil, expressed his solidarity “with the Ecuadorian people, their Armed Forces and relatives of the victims of the attack.” “We condemn all acts of violence,” Santos added.

In recent months there has been an increase in attacks against Ecuadorian forces deployed in the area or patrolling the border region. This type of attack, usually with explosives detonated by remote control or mortar shells, both made by hand, has intensified in the wake of the car bomb attack on January 27.

Then, President Lenin Moreno considered a “terrorist act” linked to gangs of drug traffickers. Authorities said that behind the attack was a criminal group led by alias ‘Guacho’, a dissident of the FARC guerrillas. (I)