BREAKING NEWS
Correistas ‘trolls’ work to return to power and have impunity
Music: Elvis Crespo talks about his love song for Guayaquil
Cocoa and pitahaya, with problems to export
President Lenín Moreno extends suspension of the working day until April 12 and there will be no classes this month
The payment of the family protection bond for the health emergency began
Relatives of deceased from covid-19 do not have to approach agencies to register deaths
Coronavirus: Centro de Convenciones de Guayaquil will receive patients
Coronavirus cases in Ecuador April 1, at 17:00: 2758 infected
Floriculture sector loses $ 1.5 million daily due to the health crisis
Barrel of oil ends March with the largest monthly loss in history 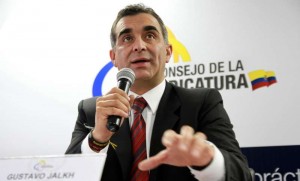 Gustavo Jalkh and Carlos Ramirez, presidents of the Judicial Council (CJ for its Spanish acronym) and of the National Court, respectively, described yesterday as unacceptable the statements of US Senator Patrick Leahy, who said that “judicial independence in Ecuador is seriously compromised.”

Jalkh and Ramirez made public their displeasure in a statement from Andorra, where the Second Preparatory Meeting of the XVIII Ibero-American Judicial Summit takes place.

Democratic Senator Leahy reported that Assemblywoman Lourdes Tibán (PK) has suffered attacks and was sued after criticizing the administration of President Rafael Correa.

In a text shared with other 99 members of the US Senate, Leahy noted the need to “condemn these attacks on freedom of expression, political rights” and that they should “defend the judicial independence which is fundamental for democracy in Ecuador.”

Both authorities claim in the statement that “what the senator (Leahy) is looking for is to pressure an independent Judicial Branch.”

Tomas Alvear, director of the CJ, does not understand on what grounds a person who has never been linked to the local justice system can talk about it.
Source: http://www.eluniverso.com/noticias/2015/12/17/nota/5302485/autoridades-cuestionan-declaracion-senador

Correistas 'trolls' work to return to power and have impunity

Music: Elvis Crespo talks about his love song for Guayaquil