Azuay rejects intervention of the Prefecture of Guayas in boundless areas 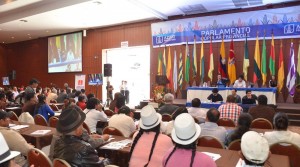 The Provincial People’s Parliament met on Saturday in a meeting organized by the Prefecture of Azuay, and according to an official release, “about 3,000 people” were called from different counties. The topic discussed was the rejection of the intervention of the Prefecture of Guayas in certain areas not delimited between provinces, and anticipated their support for a referendum to settle the dispute in the field of Abdon Calderon.

The document of the resolution proposes: To consider a query “especially in the field of Abdon Calderon”; of “Strongly rejecting” actions for non-compliance of the agreement by the Province of Guayas; and to call on local authorities to resolve the differences.

The President of the Parish of Molleturo (Azuay), José Gutama, said that until last Thursday Guayas had machinery in the route towards San José del Recreo-Abdon Calderon.

Gutama said that “much of the population of Molleturo is dissatisfied ” with the attitude of the neighboring province. He expressed his support for the referendum.

Jairala denied the execution of works in Abdon Calderon, and has also spoken in favor of going to the polls.