Babahoyo rivers are the only dredged, Guayas rivers not yet 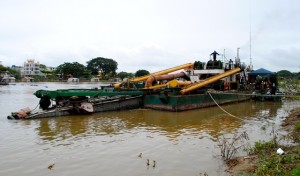 Jimmy Jairala, Prefect of Guayas, talked yesterday about dredging of rivers and said: “There are many specific problems in Guayas , for example the area of El Palmar that puts at imminent risk populated areas of Guayaquil and Samborondón, for which we must take action immediately”. This about El Niño current that is already in the Pacific, according to experts.

Since long before the sedimentation problem was discussed in Guayas, the main river of Babahoyo (Los Ríos) and its tributaries was being filled.

In 2012 the Municipality and the Navy announced the arrival of el Puyo dredge to enhance the hydraulic fill in Puerta Negra and Mujeres Solas. The apparatus is in the province capital, anchored at the jetty.

The Puyo performed additional work due to its great ability and strength to fill 50 cubic meters per month and its reach to deepen a lot more into the background.

In Daule, for example, near the scenic boardwlak, it is formed a large island in summer, while Bachillero river and other smaller rivers also have high sedimentation.

The Mayor also said “we have asked that as there is a 70% subsidy for municipalities, prefectures also have it to acquire thedredges and to have a line of credit from BEDE (State Bank) to finance the dredging process.”

Washington Nunez, President of the Irrigation Boards Association of Ecuador, said that in 2013 the prefectures received $ 105 million for irrigation and drainage. And the Ministry of Agriculture and Senagua, $ 44 million. By 2014 all these bodies will have received $ 152.2 million in total. Jairala ensures that the second phase of the Guayas dredging costs $ 45 million.