The month long uprising has expanded in Manama as well as the Shiite villages like Sitra. The insurrection has brought the fury of the Sunni monarchy and their Saudi-led allies who believe that the constitutional reform demanded by the Shiite are a threat to the 200-year-old-rule. Currently the security forces fought again with Shia demonstrators in an effort to submit the protests. 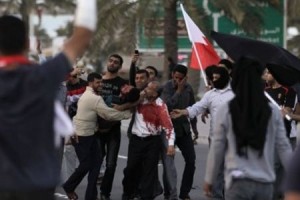 Police and military forces installed checkpoints at key bridges and junctions to control the population. Recently the security forces took control of Salmaniya medical centre, which is Manama’s main hospital. The doctors of the establishment informed that protesters were denied treatment and the staff was threatened.

Meanwhile the raids were lead by one of the leading Shia dissidents, Hassan Mushaima. The opposition is being accused of contacting foreign states and inciting murder and vandalism. The United Nations condemned the actions taken to quell the demonstrations. Sheikh Ali Saliman, the leader of the al-Wefaq opposition group urged the UN to investigate the matter and to withdraw the forces of Saudi Arabia from Bahrain.

The government troops maintain the control of the Pearl Monument Roundabout, which was the focus of demonstrations. The police took the square back after firing shotguns and tear gas from their armored vehicles. Overwhelmed the demonstrators were forced to flee.