All eyes are on the fusarium race 4 (R4T) and none on the banana bunchy top virus.

Although it is not as lethal as the fusarium, its effects on production and the costs of its control are high, so it is recommended to take the necessary risk controls to avoid entering Ecuador. 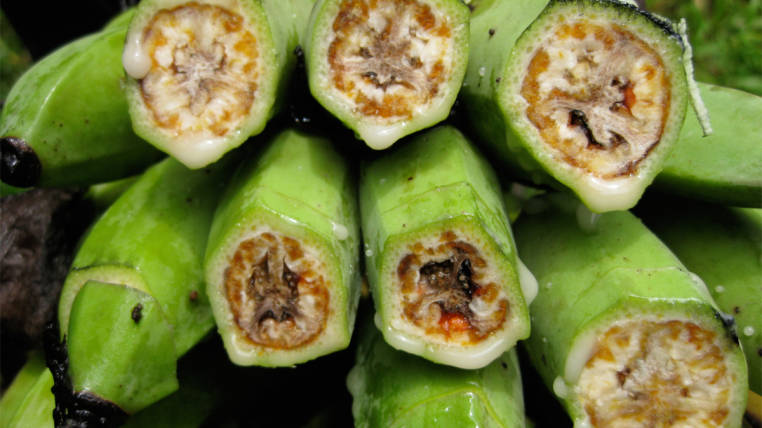 The disease was initially reported in Fiji (Asia) in 1889, but is likely to have been there since 1879; at the beginning of 1900 it was reported in Taiwan and in 1901 in Egypt; subsequently appeared in Sri Lanka and in Australia in 1913, both infections were probably caused by the importation of infected grandparents from Fiji.

In 1940, it was introduced in India from Sri Lanka. It is currently distributed in 19 countries in Asia; 17 nations of Africa and Oceania, Hawaii and Brazil. In the countries of the Andean area this disease is not present.

Diario EXPRESO spoke with the expert Mauricio Madrigal, who worked with infected plantations in the Philippines, during the International Banana Convention organized by the Banana Exporters Association (AEBE), last week in Guayaquil.

“In the Philippines, the fusarium is one of many problems, because we have other more aggressive diseases that are lost, even more plants than by fusarium, such as bunchy top virus, which in a day can make you lose thousands of plants, no it’s present in America, but it’s complicated, in the Philippines my biggest headache was that, ”Madrigal said.

The virus (bunchy top) is transmitted by an aphid. The plant dies very quickly, as if it had infected glyphosate, although it is a headache is manageable, like moko, the issue is that fusarium remains in the soil for decades.

The fusarium was detected this year in La Guajira, in northern Colombia, where it is estimated that 70% of the bananas in the area are infected.

The contingency plan to prevent the entry of the bunchy top is a very complicated matter, “the important thing is to avoid bringing infected material, because the vector, the aphid, exists in Ecuador,” he says.

The former minister of agriculture of Ecuador, Alfredo Saltos Guale, adds the importance of controlling also the bacterial moko, a disease that causes the death, first, of the young leaves of the plant.

Right now, he says, in Ecuador there are quarantine banana farms in Esmeraldas, because this mustard is more susceptible than bananas.

The fruit harvested from a plant with moko leaves with black spots, which does not make it consumable.

Ecuador officially reports 180,000 hectares of bananas registered with the Ministry of Agriculture, but groups of producers and exporters estimate that there are 250,000. There are 110,000 bananas.

Between bananas and bananas Ecuador exports a little more than 3.2 billion dollars (data from 2018). This fruit is what moves the shipping and port business.