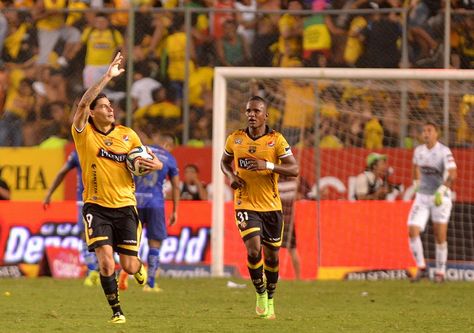 Barcelona and Emelec, tied 1-1 in the first national championship final before thousands of fans who came to the Monumental stadium to witness an unprecedented edition of the “Clasico del Astillero.”

The goals of the match were scored by Angel Mena (19m) for Emelec and for Barcelona, Ismael Blanco (89m) marked.”

The midfielder Mena received a pass and beat the Barcelona goalkeeper Maximo Banguera with a shot, opening the score in the 19th minute of the first half.

For Barcelona, the player Giovanni Nazareno kicked a center shot and striker Ismael Blanco, without scores from Emelec defenders managed to headshot and put the draw in the 89th minute.

This result has left open the possibility for both teams that will face once again in the return match next Sunday at the stadium George Capwell at 16:30, to define the new champion of the Ecuadorian soccer 2014.”