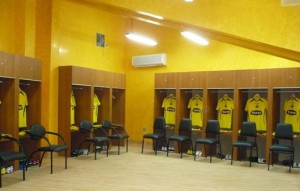 Alfonso Harb, the new president of Barcelona Sporting Club, presented the new players of the team, the Argentinean Rodrigo Marangoni, and the Brazilian Rodrigo Texeira, who come as the new reinforcements for the yellow team.

The presentation occurred in the facilities of GamaTV channel and TC Television, during a press conference that began around 11:35 am. Such channels acquire the rights of transmission of all the Barcelona matches.

Harb thanked the media for their economic support to bring Marangoni and Texeira.  The president said that these new players would allow Barcelona to have a clearer perspective of their objectives. However, he does not know how long will he remain in charge.

Harb revealed that the team was assembled with their coach, Ruben Dario Insua. During the press conference, Carlos Coello, the main executive of TC Television gave Texeira the teams shirt with the number seven.

Estadio Monumental is Mortgaged for an IESS Debt