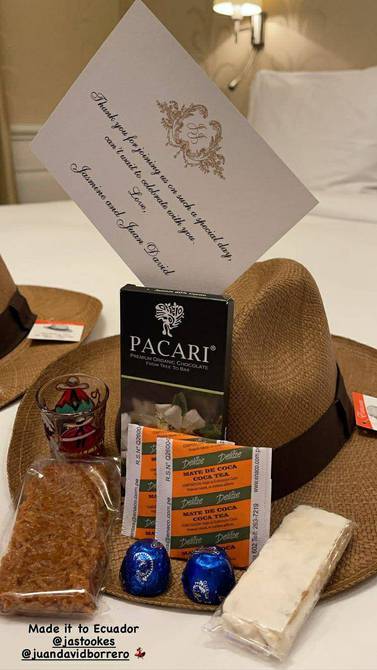 Since then, Ecuador has been observed by the millions of followers not only of the newlyweds, but of the Victoria’s Secret models.

Some of them showed the city of Quito on their social networks, especially its historic center and even at the time of leaving, when they shared the majestic Andes mountain range from the plane. And also Ecuadorian products such as Pacari chocolate, Salinerito chocolates and toquilla straw hats.

Companies and unions consulted indicate that the event was a commercial showcase for the country, which should be taken advantage of.

He says that the country has several advantages for the wedding industry such as being in the middle of the world and having ample air access.

The wedding between the son of Vice President Alfredo Borrero and the Victoria’s Secret model had a one-year planning, according to a letter from Carolina Muzo, master wedding planner  and part of the wedding planning  service, which was known last Saturday.

In this document the company Fialo Eventi is mentioned, which was in charge of the assembly of the church’s porticoes.

The food was prepared by  chef Alejandro Chamorro, one of the owners of the Nuema restaurant.

Vivero says that the contracted establishment was in charge of preparing the menu, which included, esmeraldeño pangora encocado and coconut textures; or beef tenderloin with celery, turnip and smoked onions.

“A very interesting menu, with Ecuadorian proposals and that is what we rescued. Ecuador is prepared for major events and it is necessary for the Ministry of Tourism to give it more desire to promote events of all kinds, ”says Vivero.

The Nuema restaurant belongs to the Pichincha Restaurant Association. It appears in the list of the 50 best restaurants in Latin America (Latin America’s 50 Best Restaurants) and entered the  ranking  at number 48 in 2020.

Vivero also indicates that the  Hotel Hilton Colón also participated in the assembly.

A brand that was not hired but that attracted attention was Pacari. The Ecuadorian chocolates were replicated in the Instagram  stories  of the supermodels.

Santiago Peralta, general manager of Pacari, affirms that he never expected that impact, that it was not the intention. “But that the country looks good, that the avant-garde products of Ecuador are known, not necessarily as a brand but as a cocoa country,” he points out.

Pacari gave the couple approximately 40 chocolates as a wedding gift , including jasmine, lemon verbena, passion fruit, uvilla and others.

Previously, Peralta held a tasting last Friday, which was enjoyed by the newlyweds, Tookes’ parents, Borrero’s mother and other guests at the Pacari Experience House, in Quito.

The connection arises because Borrero’s mother contacted Peralta last Tuesday with the intention that visitors learn about the history of chocolate.

“It was very informal, very nice, there was great interest in chocolate and the least we could leave behind is a gift for a married couple,” says Peralta.

The owner of Pacari welcomes the country’s exposure and believes that there is potential for it to be a destination for weddings or vacations.

Pacari has been in the market for 19 years and its dark chocolate has registered an increase of 70% in Europe.

They are seen alongside Pacari in what appears to be a gift to Borrero and Tookes’ wedding guests.

The Ecuadorian company was born in 1992 with the production of cocoa paste and currently exports to countries such as Japan and France. (I)

In Ecuador there is an 85% decrease in covid-19 cases