From Saturday, September 4 to Wednesday, September 8, 2021, a total of 648 migrants from Central and South America have been found in buses and crowded into homes in Nuevo León, northern Mexico. 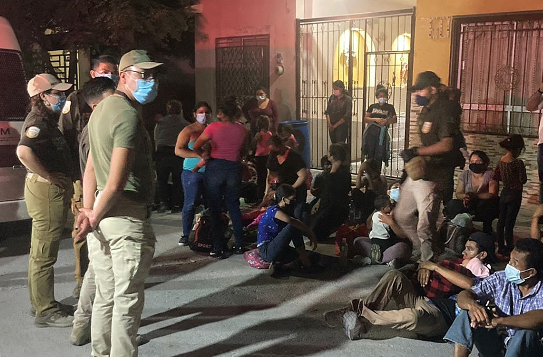 The data were presented this September 8 by the National Institute of Migration (INM).

This transport unit was mobilized by highway 57, a road artery that connects Mexico City with Piedras Negras Cohauila, a town on the border with the United States.

That same day, the State Attorney General’s Office reported an address in the General Zuazua municipality with the presence of possibly foreigners.

At the site, 15 Guatemalans, 13 Salvadorans, and two Honduran adults were identified.

“In some cases, migrants were located through anonymous notices or through an instant messaging application for mobile phones that warned of irregular situations,” the INM reported.

The INM also details a case registered last Monday, in which, from a message through an instant messaging application for mobile phones, a house in the municipality of Apodaca was described.

In that place the authorities found 77 people from El Salvador, Honduras and Guatemala, including 18 single adults, 6 unaccompanied minors and 53 more (25 minors and 28 adults) who were part of family nuclei.

While at midnight last Saturday, an alert from the State Police about the presence of people of foreign origin in a house in the municipality of Juárez allowed migration and state agents to identify 139 migrants from Honduras, Guatemala, El Salvador and Nicaragua, including 84 family members, 39 single adults and 16 unaccompanied minors.

Human traffickers seek routes for foreigners and sometimes transit in the south-southeastern states of Mexico, such as Chiapas, Tabasco, Veracruz and Oaxaca.

In addition to those in the north, such as Baja California, Sonora, Chihuahua, Coahuila, Nuevo León and Tamaulipas, on the border with the United States, the last stops on the migrants’ journey to the United States.