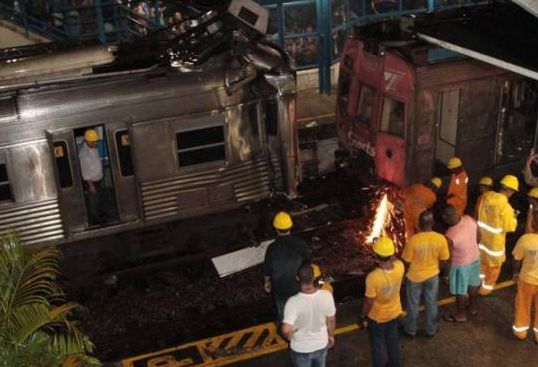 The collision of two metropolitan trains in the Baixada Fluminense, in the southeastern Brazilian state of Rio de Janeiro, left on Monday 158 wounded, most without serious injuries, according to the latest tally of relief agencies.

The Fire Department of State reported that the accident occurred at the Presidente Juscelino Kubitschek station at 20:20 local time (22:20 GMT), in the town of Mesquita, metropolitan region of Rio de Janeiro, the regional capital.

Until midnight of Monday, authorities reported 69 injured, but a new balance increased to 158 the number of passengers assisted by cuts and injuries.

At the hospital in Nova Iguaçu entered “158 patients, victims of the collision between two trains in the town of Mesquita,” told to AFP the medical center through a message.

The train had left the do Brasil Central, in the Rio de Janeiro downtown to Japeri, in the Baixada Fluminense, and at the Presidente Juscelino Kubitschek station, the second composition of wagons rammed from behind another one that was leaving passengers in a Mesquita station.

According to the company Supervia, which manages rail transport, the causes of the accident are being investigated by different agencies, including the Civil Police of Rio de Janeiro.