As a boy he was involved with the terrorist group, his language was death and violence. Briceño’s life was characterized 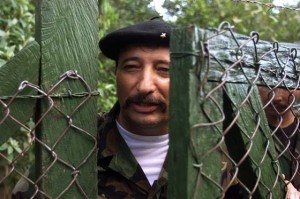 with terror. From age 8 he received intensive military training, by the time he was 12 years old he was part of the ranks of FARC. Immediately he entered the armed conflict, his qualities as a combatant and strategist got the trust of Tirofijo. With the knowledge Briceño had, he began to kidnap military officials and policemen escalating to politicians so he could blackmail the Estate.

One afternoon of August 2001, an elderly couple arrived to the villa where Jojoy lived, surrounded by more than 300 hundred men armed with Kalashnikov rifles that were bought to the Security Advisor of the Peruvian President, Vladimiro Montesinos. The couple brought a box with 650 millions of Colombian pesos, equivalent to $325,000. When Jojoy discovered that two millions were missing for the ransom of their son he was enraged and quickly pulled out his gun and shot them both in the head.

The driver that brought the couple and the money witnessed this event, months later he told the press what he saw. Shortly thereafter his body was found on the side of a road, his car in flames, leaving a wife and five children who were exiled to France.

No matter how careful Jojoy was, he was always tracked by intelligence services, who still don’t know if his real name was Julio Suárez Rojas or Jorge Briceño Suárez, his birthplace could be the town of Cabrera, Cundinamarca or in Boavita, Boyacá.

Briceño’s mother had to leave her hometown to escape from the civil war between liberals, the party to which she belonged, and the conservatives. The woman established in the south of Bogota, in the communist region of Sumapaz, there she worked as a cook for the rebel syndicalism leader Manuel Marulanda, Tirofijo, who would later create the FARC. She was one the first female terrorists of the group.

His careers as a soldier lasted until 1983 when he caught the attention of Arenas who made him his chief of security. In 1989, Briceño commanded the Seventh Front of FARC, by that time the commanding officer of that division was discovered trafficking cocaine, back then the FARC saw with contempt those illegal’s dealings which years later would become the income source for the terrorist group.

Jojoy career was filled with promotions that allowed him to create the Eastern bloc and become member of the group seven warriors, known to many as the “General Secretariat” which is the maximum authority of FARC. During the late 90’s he captured the capital of the Mitú province with a group of 500 guerrilla soldiers, this put the Colombian government in a bad situation. Briceño remained in that province for a week of looting, robberies and burning buildings of public offices and court houses. Soon the President Andrés Pastrana, his military chiefs and a military base in Brazil that was borrowed for a few hours allowed the recovery of Mitú.

During the next year’s Jojoy began to kidnap many military officials and policemen who surrendered due to the superior numbers of Briceño’s army. Later he proceeded to capture politicians as a way to blackmail the Colombian Estate, among those victims was the ex presidential candidate Ingrid Betancourt. After eleven years, some of these victims are still captured in concentration camps of FARC.

However Briceño didn’t care for politics, he gave himself gangster luxuries, like a $14,000 Rolex, many walking horses. He also had a harem of teenagers whom he kidnapped from different towns schools, this was his way to avoid AIDS. Briceño’s doom was the diabetes since he needed medicines and food, and especial boots due his foot sores. The last pair of therapeutically made boots came with a small GPS unit that allowed the attack that ended his career of terror.

His nickname came because the color of his skin, since he was a little boy he had white skin of a similar color to a worm that the indigenous eat and call “jojoy”, while the name “mono” came from the expression in Colombia used for people with light colored hair.

Briceño died following his concept of life and his thought “We don’t care about the Constitution or the law, because we are out of them.”