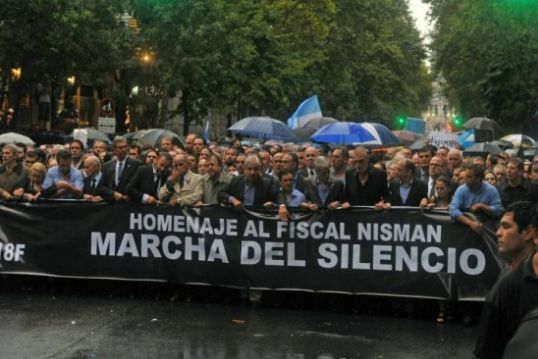 The streets of Argentina were the scene of the so-called “silent march” to “honor” the memory of the prosecutor Alberto Nisman, a month after his death in circumstances that Justice is still investigating.

Hundreds of thousands of people gathered near the Parliament of Buenos Aires and under the rain marched to the Plaza de Mayo in front of Government House.

The mobilization was called without political slogans or party identifications by a group of six prosecutors, of whom several are investigating alleged crimes of government officials.

However, there were participation of several representatives from the political opposition to the government of Cristina Fernandez de Kirchner.

The reason for the march was to “honor” the deceases Nisman and most participants called for “justice” and shouted “we are not afraid.”

Nisman was found dead with shot in the head on Jan. 18, four days after he denounced Fernandez de Kirchner by alleged concealment of the Iranians accused of the bombing of the AMIA Jewish center in 1994, in Buenos Aires.