Buffaloes, the profitable route of farming 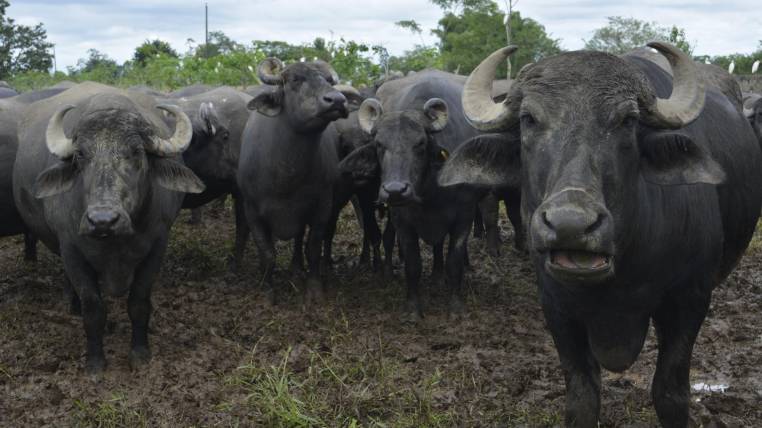 It took half a century for the buffalo to stop being seen as mere pack animals in the country. They arrived in Ecuador for the first time in 1974, but the myths that revolve around their upbringing stopped their population and made it limited. However, this is a reality that has signs of starting to change. For five years, this species from Asia has opened a new path, by demonstrating that it can become the most profitable option within livestock activity.

With big curled horns and a challenging look that inspires respect, large buffalo roam on extensive grounds where previously only conventional livestock ran. It is the postcard exhibited by haciendas such as La Victoria (in Bucay), where 23 years ago its owners began with the breeding of three specimens, which years later served as a base to feed a herd that today amounts to 500 heads. A proliferation that especially took force three years ago, after Lorens Olsen was convinced that these animals were able to generate more utility, if it began to market their meat and milk, as it has done throughout the year with the bovine business. It is a new stage in his life as a rancher, which he is promoting together with his daughter Stefanía, a 25 year old girl who is in charge of managing part of this business. From the La Victoria farm, more than 250 liters of milk are currently sold. And the meat today is sold in supermarkets like Supermaxi.

The idea of replacing cattle with buffaloes, says Olsen, was born as a way out of the crisis of unstable prices that in recent years has been affecting livestock activity. Carlos Zambrano, owner of the El Garzal hacienda (Yaguachi), agrees with this challenge to replace, in five years, the 120 cows he has for buffaloes (he already has 28), as the traditional business ceased to be attractive , due to the strong competition generated by the Colombian cattle that the country “has been entering for contraband”.

Zambrano explains that the buffalo not only adapts to any environment, but unlike cows and bulls, requires less care because it is more resistant. It is not an animal that presents problems with ticks, and although it must be vaccinated, it does not have to use antibiotics or vitamins. To this is added a higher level of meat and milk production. And that translates into profitability. While the raising of cattle represents $ 700 in sales per hectare per year, with buffalo that bill increases to $ 900.

In the region there are about 2.3 million copies. The majority is in Brazil, Venezuela and Colombia. In 2011 in Ecuador it was estimated that there were 1,300 units, but today there are already about 10,000.

Olsen admits that the viability of this activity still faces several challenges. There is not only the need to create a state policy that promotes biological improvements (through greater importation of semen) and the development of a whole productive chain, but also the virtues of the buffalo as a food to encourage a culture of consumption. And the latter does not see it difficult. No, with a palate like the Guayaquil, which today is ready to try new cuts of meat.

The potential of this activity is also to take advantage of derivatives. An office that Francisco Puig made his own two years ago. This innate entrepreneur used his 16-year expertise in the culinary world to learn how to make fresh cheese, mozzarella and Greek yogurt with buffalo milk. He started by selling them from his house to his friends and acquaintances, but today he gets ready to inaugurate his own store in Plaza Lagos (Samborondón) within a month. The ignorance of the subject is not something that worries you. Once people try their products, he says, the “unbeatable” taste will make it come back and increase consumption. (I)