In times of emergency, Eva, Genesis and Jampier have not had the privilege of many: that of being able to stay at home. This is because, like thousands of Ecuadorians, they face a battle similar to the one that the State tries to assume with the health of the population: that of not letting some businesses die and thereby protect their own sources of work . 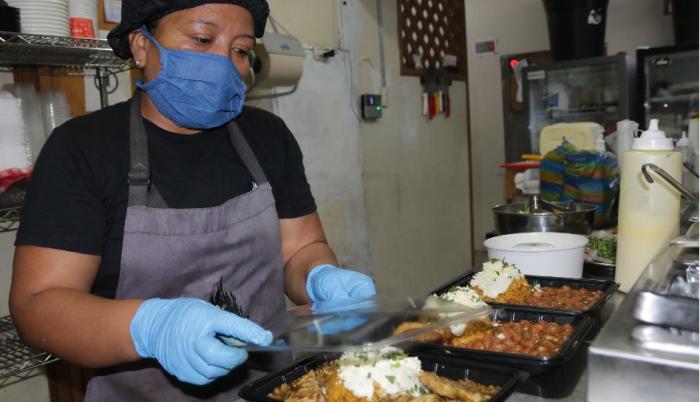 From being a poorly organized sector, as a union, Guayas restaurants today challenge themselves to work under the same compass. More than 350 brands (the majority of this province), although they do not serve the public, try to reactivate their internal operations and in this task they provide Eva and her colleagues who, these days, cook and dispatch the Moro Grill (Samborondón) menu in tubs. , one of the last to open internally and to decide to make home deliveries.

A task that, says its owner, Francesca Ferrero, has become titanic, when there is not enough labor and when supplies in the markets are scarce and at high costs.

For a month, she has coordinated the management of this hundred restaurants that seek to improve the outlook caused by the coronavirus, which several weeks ago left them unattended to the public and with the obligation, by law, to pay salaries and sustain job vacancies. . For this purpose, 5 work commissions have been created, he says, which seek to pave the way, so that the restaurants gradually reactivate themselves . “A committee is in charge of trying to negotiate with suppliers to ensure food forecasts, not everyone is working.” Others, on the other hand, are dedicated to detecting the needs of the union and formulating proposals to be able to reopen, when all this happens.

Quantifying the impact of this sector is complicated, due to the high informality that exists. However, says Ferrero, it is believed that at least 60% of locals can be beaten. “There is already a study by Espol that indicates that if the situation continues as it is, this year $ 800 million less would stop entering only our sector,” he maintains.

Losses are and will be inevitable. The challenge now is to ensure that these are not huge. And the commercial sector also embarks on that task. The National Federation of Chambers of Commerce has just launched the “Save a Trade” campaign , which is nothing more than promoting advance purchases to the public to receive post-quarantine. There are other proposals that, instead, include an incentive to this. A prepaid shopping program has been created that is promoted by the restaurants and the National Brewery that it plans to take effect from tomorrow: in this, citizens will be able to purchase purchases for a certain value, but with the advantage of being able to double their consumption. That is, being able to consume $ 40, paying half.

The lack of income to these sectors, which due to their condition cannot benefit from teleworking, has made every opportunity in the market be sniffed . Today, door-to-door sales are limited to prepared foods, but some entrepreneurs wonder why this cannot be opened to other types of offerings such as household appliances or gym supplies.

Vanessa Urbano, sales manager of the Taurus gym , calculates that this stoppage has prevented her company from continuing with the sales it made before the state of emergency. In the first 15 days, they calculate $ 250,000 in losses. “I distribute my products to TIA, Marcimex, Pichincha Miles , but for this reason we have stopped doing so. They do not allow us to send them at home, because they do not consider them an essential item. But right now it is … many people are very tired of being at home and require instruments to perform physical exercise, jump rope, dumbbells that can be sent by app. The demand exists, “says Urbano.

In the case of restaurants, Ferrero points out, thinking about reactivation implies drawing up a list of measures, which they will send to the Government, and which aim to help sustain business as soon as the quarantine ends. Like other sectors, they are requesting an extension in the payment of taxes and employer contributions to the IESS , but the restaurants have something else that worries them: how they can catch up on the payment of leases. The idea is that authorities can also urge landlords to come up with a flexible plan for their tenants to catch up on payments.

Added to this is the elaboration of a manual for the future reopening of establishments “following processes that are already being used in other countries where they have successfully emerged from Forty. The idea is to create an option so that people can adapt. We know that until there is a vaccine we are going to take time to get back to normal and we are going to enter quarantine periods that are surely cyclical. We don’t know what time, but we can have measures to alleviate the situation, ”says Ferrero.