State services do not include the formalization of the bodies . This was explained yesterday by Wated in RTS and added that the Ministry of Public Health (MSP) established that this process is not necessary. What he did report was that burials are done with cardboard coffins and in deep graves. In addition, it guaranteed that “all security measures” are taken to avoid possible damages in the future. 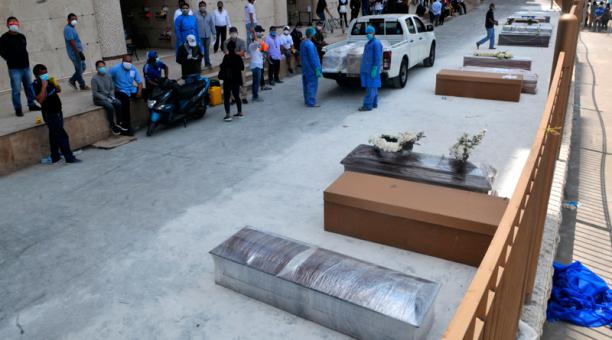 For René Cueva, an expert in Forensic Medicine , burial processes during emergencies should be more rigorous, especially for covid-19 cases. The most recommended is the cremation of the body, he said. But he understands that due to the low capacity of the crematoria in Guayaquil , the MSP changed the protocol .

Therefore, they must be buried at a depth of between three and five meters. Another observation he makes is that formaldehyde processes are necessary in these cases, to avoid the proliferation of bacteria in the environment . Especially in places with wet or muddy terrain.

Two men with masks pass by a van with a coffin outside the Teodoro Maldonado hospital in southern Guayaquil. Photo: AFP

The processes used in burials generate fear in the inhabitants of Mount Sinai . The residents of this sector of the northwest of Guayaquil are upset by the announcement of the mayor Cynthia Viteri about the creation of a cemetery in this populous area.

For two consecutive days, residents have tried to prevent the Municipality’s heavy machinery from starting work . Yesterday this newspaper contacted a resident who lives for 15 years on the site. “There are natural water sources here, we do not have sewage, ” he said. In the call, other voices from neighbors were heard rejecting the work. “It is not possible that they put a cemetery near our houses” and “we are afraid of catching ourselves” were part of the complaints that the inhabitants repeated yesterday.

Meanwhile, in the Angela María Canals cemetery , located in the Suburb, the Cabildo has already begun the expansion. In addition, it manages the creation of two other cemeteries in other sectors of the city, with a capacity for 12,000 graves.

The Minister of Health, Juan Carlos Zevallos, reported yesterday that he dismissed an official from the Guasmo Hospital because he charged the families of the victims for delivering the bodies to them. The Minister urged citizens to report these events.