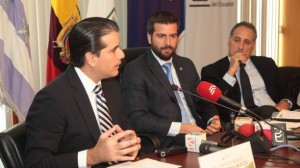 The Chamber of Commerce of Guayaquil (CCG) again emphasized the negative impact the recent resolutions of the Committee of Foreign Trade (Comex) will bring to the importing sector.

The union referred to the consequences of the tariffs increase for a great number of products, and the need to modify the calculation to access the tax incentives.

Pablo Arosemena, president of the CCG, mentioned on Thursday, January 22, during a ceremony of recognition to the trajectory of local businessmen, that this 2015 is looming difficult due to the fall in oil prices and ist impact on trade. Against this, he said that during a meeting on Monday 19 with other productive cameras he raised alternatives of trade liberalization and fiscal austerity to prevent that businesses are affected. “It is not fair that the government fiscal problem is transferred to the private sector.”