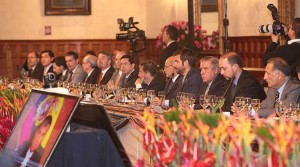 The President of the Ecuadorian Business Committee (CEE for its Spanish acronym), Henry Kronfle, revealed that business associations will develop within 30 days a “roadmap” of the work they will have to do after the agreements reached with the Government during their meeting on last Monday, March 2 with President Rafael Correa and economic ministers in the Government Palace, in Quito.

Kronfle explained that some of the changes discussed at the meeting are related to modifications in the Constitution, the laws, to issues that are treated in the National Assembly and other issues that can be solved by a presidential decree. All this, he said, focused on labor and tax reforms, investment incentives, boost to the productivity and competitiveness.

“It was a very positive meeting, practically everything (proposed) was accepted, endorsed, now we have to work,” said Kronfle, who announced that after six months they will meet again to assess the results of the public-private shared work.

In addition, at the meeting, the agenda of foreign trade and how to minimize the impacts of the new measures in the trade sector and business activity in general was treated.