Canada along with Ecuador in campaign “Chevron’s dirty hands”

On Monday during a visit to the North American country, Foreign Minister Ricardo Patiño was supported by several Canadian organizations over the pollution from Chevron-Texaco in the Ecuadorian Amazon, and also took the opportunity to point out that the environmental damage was “not accidental, they were aware of the contamination they produced.”

“We want to uncover the things that have happened, but also call awareness to Chevron shareholders, investment groups to this company, so they do not continue to support a management action of this nature, it is hurting the interests of a sovereign country,” said Patiño.

Foreign Minister participated in the celebration of Inti Raymi, where hundreds of young people from various Latin American countries, with music and banners denouncing “Chevron’s dirty hands” to the Canadian community. The opening ceremony was attended by several representatives of civil society in Canada, who supported Ecuador and showed the dirty hand of Chevron to the attendees.

Chevron refuses to accept the verdict of an Ecuadorian court made in 2011, which sentenced them to pay a restitution of $ 9,500 million to more than 30 thousand Amazonian villagers affected by poor mining practices, which were used by the old Texaco in the Amazon when it operated from 1964 to 1992. 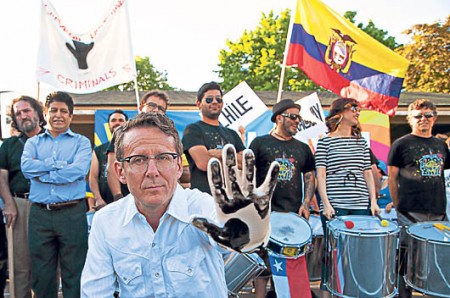 Several representatives of civil society in Canada, who supported Ecuador, showed the dirty hand of Chevron to the attendees.

Mery Zamora case will be received by the IACHR