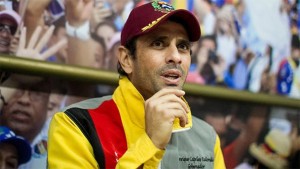 The Venezuelan opposition leader and candidate in the last two presidential elections, Henrique Capriles, said yesterday that it again “smells like devaluation” in the country, commenting that the President Nicolas Maduro has said that there will be developments in the state system of exchange ruling from twelve years ago.

“Let’s see which what they come today (yesterday) with the currency issue, it smells like another devaluation,” Capriles wrote on the social network Twitter.

Capriles referred to the announcement Maduro made last Tuesday in the sense that the economy Minister, Marco Torres, and the Central Bank President, Nelson Merentes, yesterday would report any changes in the state system of currency,even though until noon there were no news of it happening in that way.

The opposition leader insisted that state control of change favors corruption and recalled a complaint from last year. “Where is the public list of the companies that received official dollars?” because the ruling people “stole around 25,000 million dollars,” he said.