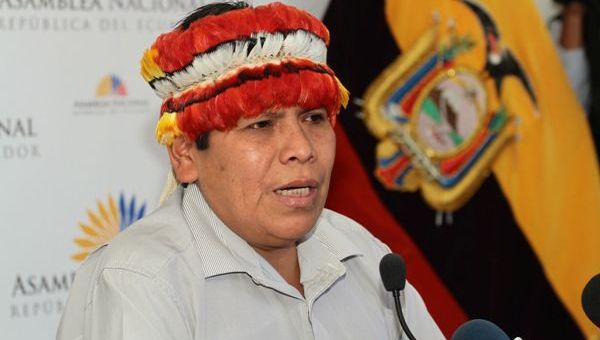 Pepe Acacho and Pedro Mashiant face a prison sentence since July 9, in which the Sole Court of the Provincial Court of Morona Santiago ordered their arrest and issued the respective arrest warrants for a sentence of eight months in prison for their participation in a protest against the Water Law, on September 30, 2009. This measure was rejected and they argue that it is because the judge is a “correista”.

According to the judicial report, the arrest was ordered because the indigenous leaders have not approached voluntarily within ten days that was granted for the fulfillment of their sentence.

The sentence was imposed since January 15, when a cassation court ruled the guilt of the indigenous leaders. In this process, the crime of terrorism that had initially been raised by a minor, typified as the obstruction of roads, was changed. Then the penalty was reduced and a fine of USD 44 was established.

Since the beginning of the process, Acacho has maintained his innocence and has described the situation as unjust, which is why he rejected these imposed measures and pointed out that the courts of justice continue to be entrenched in the current government: “Judge named as President of the Judiciary Council Morona Santiago in complicity with swallow judges, issue arrest warrant against Pepe Acacho and Pedro Mashiant. Corrupt rotten justice continues entrenched in morenismo. They are looking for us here. ”

In the protests of September 30, 2009, several Indians rose to demand the approval of the Water Law, which led to clashes between police and civilians and the death of Professor Bosco Wisuma.

Acacho was arrested in February 2011 for this accusation, when the State argued that he was one of those who encouraged the protest through the radio Arutam, of which he was a director. At that time, the indigenous leader was released a few days later, after obtaining a writ of Habeas Corpus. (I)