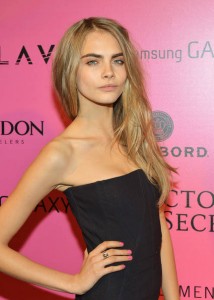 The model has been compared to her british compatriot, Kate Moss

The British model Delevingne, Cara, who at age 21 has conquered major runways in the world, now leaps to the big screen.

Nominated in 2012 as `model of the year´ at Brit Fashion Awards, Delevingne has been compared to her compatriot Kate Moss. Cara owns a charisma that captivates all, getting to have thousands of followers on her social networks,where she shares polemic photos.

After having a small role as Princess Sorokina in `Anna Karenina ´, we will see her in` Face of an angel,´ in company of Kate Beckinsale and Daniel Bruhl, where she will play the role of Melanie, a student related to Amanda Knox, who in Real life was jailed four years in Italy for the murder of Meredith Kercher, when refusing to participate in a sexual game, and who was absolved in 2011.

The model will also participate in the `Timeless´ series where she will play a young woman whose husband is in Afghanistan.