Carlos Ramírez was reelected as president of the CNJ 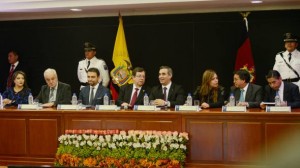 Carlos Ramirez was reelected as president of the National Court of Justice (CNJ for its Spanish acronym), for the next three years. On Monday the seven new judges were inaugurated, once the process of partial restructuring of the highest court of justice was completed.

The election of Ramirez, that took two hours and was in a reserved session, did not generate surprises, because his name was the only one raised for the charge.

With the assignment of the new period, he will comply seven consecutive years in office. In 2011, Ramirez was president during the last year of the transition Court. Then, in January 2012, he was chosen to preside over three years the Court that was appointed through a public tender by the Council of Justice (CJ) of transition, led by Paulo Rodriguez.