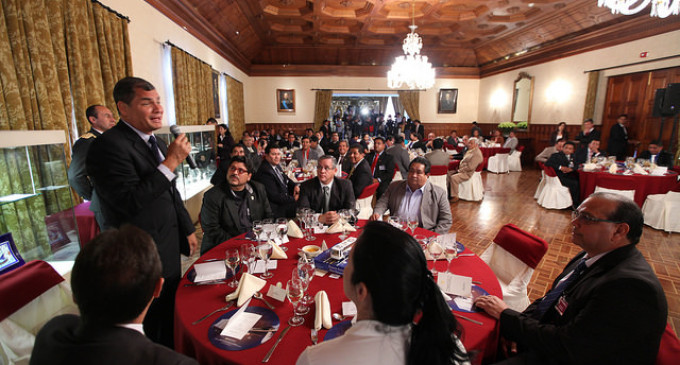 President Rafael Correa invited yesterday, September 1, representatives of drivers unions to a lunch in Carondelet. About 130 union leaders, Ministers and Vice President Jorge Glas, were present at the meeting which lasted about two hours. The group led by Fabricio Vivanco, insisted on treating the increased value of the bus tickets.

For Carondelet it was clear the issue of urban traffic competencies: Municipalities that have assumed this responsibility must take charge of tariffs. Transport Minister Paola Carvajal, emphasized the situation in Quito: “The decision is absolute of the City Hall of Quito and hopefully they do not evade it.”

But the picture is presented complex for drivers of the 25 municipalities that until last week have assumed the powers of transit because they lose the state subsidy.

The only agreement they reached with the President was to reconvene to analyze the details of each modality of transport. For example, there will be a workshop with the interstate drivers the next week. And Carvajal offered technical assistance from the Ministry.

Urban drivers will insist in treating the issue with the municipalities. According to Vivanco, they sent a proposal to the Mayors of Quito and Cuenca. “They have to resolve the problem of tariffs,” he said.