Casa de la Vida Helps Everyone Regardless Their Religion 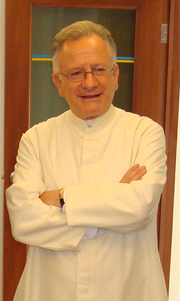 No one could imagine that behind the walls of a house, there are hundreds of people wanting to help the community. Casa de la Vida, or CDV (House of life), is a nonprofit organization that provides support to single mothers, pregnant mothers, young people and AIDS patients.

It all started when Father Paulino Toral saw an image of the Virgin Mary pregnant, which was further called Mother of Good Hope and was placed in the temple of Urdesa, that is when the idea of forming the CDV began, and thus to “evangelize origins of human life, sexuality,” as it says in its vision.

“I think the key to the renewal of society are women, not men, who educates a woman, educates a society, so mothers are the key,” says Father Paulino Toral, CEO of CDV.

In the CDV, there is a Gynecologic Medical Center for low-income mothers’ care, there they can have access to ultrasounds, blood tests and doctor visits. A team of volunteers gives lectures about nursing, pre-natal nutrition and exercise for mothers, as well as recreation, baby shower and the baby’s box. “We organize contests, offer various prizes, including a crib, then we give them a basket with diapers, milk, baby articles,” said Gladys Chalela de Bustamante, a volunteer in the sewing area.

“We also work with youth, we conduct talks in schools, the guides of life are responsible for that, we have served 14,000 youngsterns. We speak positively about purity, chastity, abstinence until marriage and faithfulness until death,” explains Father Paulino. “We also have the school of lovers and boyfriends (EDEN) that does not prepare young people for marriage, but for falling in love, because marriage is the end but EDEN acts in the beginning so that they behave well. The messengers of life, prepare the girls from the age of 12 years, to make a good choice for a boy, they help them get along with their love so they can get married at the end. Nowadays, the girls are worried about their profession, but they do not care for the most important, their vocation, and they they success in their profession but fail in their vocation and that’s why so many women are abandoned and divorced, because they did not choose a good husband,” he adds.

Since its inception in 2008, the CDV has served more than 5,000 pregnant women “we have helped mothers who thought of abortion, mothers who were in crisis and wanted to solve a problem, we help them solve their problems and we’ve had parties with the children who were not aborted and their happy mothers,” says Father Paulino. Among the services offered by CDV is the psychological help “when a woman aborts, she gets a trauma for life, we saved the child from death and the mother from trauma,” he adds.

“Volunteerism is the engine that drives Casa de la Vida,” said Monica Adum, who with Father Paulino takes care of the administrative functions of the CDV, as the executive director.

The CDV is located between the streets Todos los Santos and Victor Emilio Estrada in Urdesa, a few steps from “La redonda” church. “We give attention to all the ones that need our help, regardless of their religion. We are a little drop od water in an enormeus sea” said Adum, who made an invitation to those who want to help the community by volunteering.