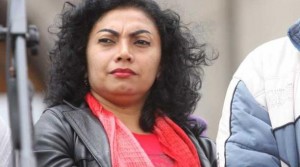 Mery Zamora, former president of the National Union of Educators (UNE for its Spanish acronym), was convened by the Constitutional Court (CC) to a public hearing in which the outcome of an extraordinary action for injunction filed by the Attorney General of the State shall be defined.

For that diligence, the Judge of the CC, Ruth Seni, requested a hearing for the next February 10, at 09:30, at the premises of the institution in Quito.

The Attorney General, Galo Chiriboga, presented the application for protection, after the National Court of Justice ratified the innocence of Zamora, who was accused of sabotage and terrorism for allegedly inciting violence to students in Guayaquil, during the events of 30S.

The CAN denies authorization of safeguard measure in Ecuador