Opposition march for the shortages and inflation in Venezuela 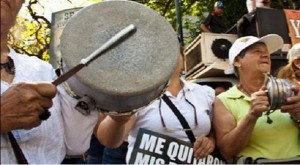 Venezuela’s opposition manifested on January 23 in Caracas to protest against the shortage of products, the inflation and to request a change in the economic model of the Government of Nicolas Maduro.

The adverse sectors to the government of President Nicolas Maduro called on Venezuelans to take to the streets in the so-called “march of empty pots” to express discontent generated by inflation and the growing shortage, which has led to thousands of people in the recent weeks to make long queues outside supermarkets to buy food and commodities.

Meanwhile, Maduro headed back his criticism against opponents, whom he accused of being outside “looking riots, violence … destabilization” and promoting “an economic war.”