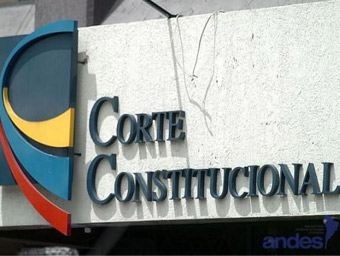 Before the issuance of an opinion about the constitutionality of a popular consultation of citizen’s initiative to prevent the exploitation in a part of the Yasuni National Park, the National Electoral Council (CNE) must legitimize the signatures for this process, thus the Constitutional Court (CC) reported yesterday in a statement.

“The National Electoral Council should send to the Court, together with the request, the favorable report of fulfillment of democratic legitimation, in adherence to the provisions of the fourth paragraph of article 104 of the Constitution, requirement that must be verified by the Board of admission”, the document indicates.

Article 104 establishes  that in all cases of popular consultations “it will be required a  prior opinion of the Constitutional Court on the constitutionality of the proposed questions”.

Last August 22, the collective Yasunidos, represented by the jurist Julio Cesar Trujillo, presented a draft of the question that should be asked to the people: “Do you agree that the Ecuadorian Government maintain the crude oil of the ITT, known as block 43, indefinitely underground?”.

Therefore, yesterday, Trujillo went  to the CC along with other activists to demand the delivery of the forms from the Electoral Council to collect the 584.116 signatures, that represent 5% of the electoral registry, needed to call a referendum.

Last Saturday, President Rafael Correa challenged the Yasuni defenders to collect enough signatures to convene the consultation, claiming that he does not fear the results because he knows that the people trust the Government.

“There is the Constitution, if you have enough support then collect the signatures for the referendum ?” “Let’s go to a consultation, I am not afraid”, said the President.