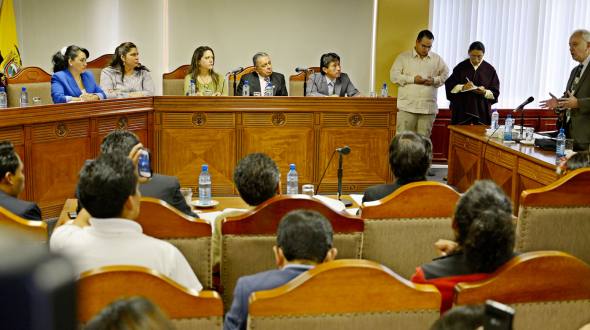 The twelve Huaoranis that are being investigated for the alleged attack and death of a taromenane family in 2013, shall be processed by the Constitutional Court (CC). The entity has a period of 45 days to determine whether the group shall be sentenced by ordinary or indigenous justice.

Manuel Viteri, Judge of the CC, yesterday called to an audience the Prosecutor and the defense of the Indigenous to hear arguments about the inquiry made by the Second Penal Judge of Orellana Álvaro Guerrero. This, before defining to conduct a trial for the alleged crime of uncontacted peoples genocide.

Andrés Cuasapaz, the case Prosecutor, fears that the penalty between 16 and 25 years in prison for the crime, could be disproportionate to the rights of indigenous nationalities.

However, according to the Anthropologist Roberto Narváez, who conducted an expertise for the Prosecution, considers that this revenge is a social obligation in these communities. Which was carried out with firearms and not with spears or with the participation of former warriors, so it would have broken the indigenous tradition for such acts.

This view is not shared by the public defender, Ernesto Pazmino, who questioned that these people are investigated for genocide. Given this, he recalled that “there is a war of about 100 years between Huaorani, Taromenanes and Tagaeris and the solution is not in the Criminal Law, but in state policies to protect them.”