CELAC: Ecuador wants to prioritize the science, technology and infrastructure 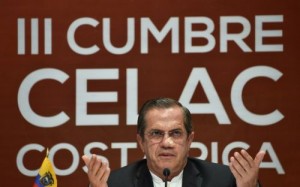 Ecuador wants Latin America and the Caribbean to give priority to science, technology and infrastructure to reach quantifiable goals in the CELAC, said on Tuesday Foreign Minister Ricardo Patiño. This, after that Costa Rica will delivers on Thursday the presidency of the block.

“We have to work together on issues of infrastructure and connectivity. According to the CEPAL (Economic Commission for Latin America), the region should invest at least 6.5% of its GDP on infrastructure, and we barely invest 2.5%,” Patiño lamented at a press conference.

According to the minister, Latin America has only four universities among the top 200 institutions of higher education in the world, when it should have between 12 and 15 over the next five years.

For Minister Patiño, the CELAC has to focus on a small group of subjects like these and propose attainable goals, instead of disperse into many matters that are discussed year to year without attaining results.