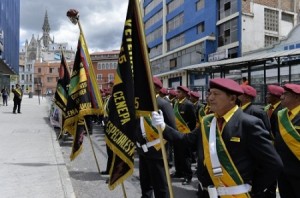 One hundred and three former soldiers disabled as a result of their participation in the conflict with Peru in 1995, yesterday requested the Council of Citizen Participation and Social Control (CPC for its Spanish acronym) to be considered as heroes and have access to the benefits contained in the law of Heroes and Heroines.

The claim of the survivors of the conflict is that they are not in the list of 145 people qualified by the Verification Committee of Heroes and Heroines.

“Although in the lists of the Ministry of Defence we are included as beneficiaries, in the Participation Council they set us aside. They declared themselves deaf,” said Jorge Bolaños, wounded in combat.

Fernando Cedeño, President of the CPC, received the affected during a plenary session and committed to speak to the Commission and authorities of the Ministry of Defence “to see name by name who is beneficiary,” he said.

Nebot will not be present in formal ceremony of October 9