Changes in the cabinet are been ‘evaluated’ according to Correa 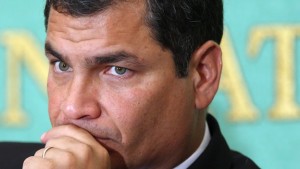 President Rafael Correa announced yesterday that changes in the Cabinet would still be ‘evaluated.’

“We are evaluating and it is not that they have performed a bad role (ministers), but everyone responds to a certain stage,” said the President.

Last Friday, Correa initiated changes to his team of ministers, thus, until yesterday were appointed, by executive decree, four ministers.

In addition, Correa denied that Victor Hugo Villacrés is going to leave the direction of the Ecuadorian Institute of Social Security (IESS for its Spanish acronym), and said: “… It is the opposite.”

The President did not comment on the alleged output of Nathalie Cely from the Embassy of Ecuador in the United States to hold a coordinating ministry.

Indigenous performed “Crusade for the Dignity, the Justice and clean hands”