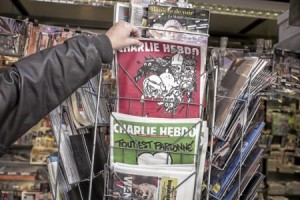 The French satirical weekly magazine Charlie Hebdo returned yesterday to the newstands with a circulation of 2.5 million issues.

In the new issue, Charlie Hebdo gathered in its cover drawing some of its favorite targets, including the Catholic Church, the French right and the extreme right.

The drawing, signed by cartoonist Luz, is accompanied by the phrase ‘C’est reparti!’ (We´re Back!).

“It is sold slowly, nothing compared” with the issue published a week after the jihadist attack that killed 12 people, said a newstand owner in the railway station Saint-Lazare, in Paris, according to the AFP news agency.