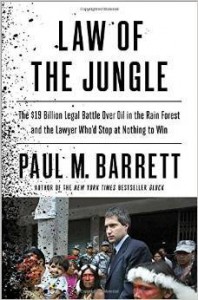 Paul Barrett, author of “The Law of the Jungle” book, which will be adapted for the screen by Brad Pitt, says that the film could help to resolve the dispute by other means. Recently, the actor’s production company Plan B acquired the rights of Barrett´s book, which is based on an investigation on the dispute between the oil company and the Ecuadorian government.

Several Ecuadorian organizations launched a campaign to dissuade Brad Pitt to continue with the project. President Rafael Correa also joined the initiative and invited the actor to visit the affected area.

“If the movie is done the right way, a much larger audience might learn about the complexity of this type of problem,” Barrett said. And specified: “It can show corporate wrongdoing by the US company, Ecuador´s failure to take responsibility for its own country, wrongdoing of Ecuadorian corporations.”

Barrett launched a new edition of the book and adds a chapter that analyzes a solution to the case by taking an idea of Burt Neuborne, Professor of Law at New York University, who proposed a similar solution to that used in Germany with companies that used Nazis forced labor during World War II.