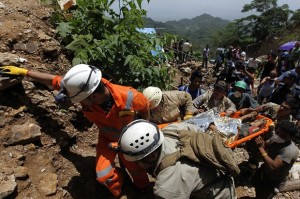 A Chilean Expert Group in miner’s rescues had planned to help Honduras yesterday. The hopes of finding alive eight miners trapped in the a collapsed mine craft that occurred last Wednesday in the south of Honduras, have washed away from the lifeguards.

The accident occurred due to the collapse of one of the tunnels of the San Juan de Arriba mines, in the southern department of Choluteca.

“I see no hope of life, we are going to rescue dead bodies,” said the Geologist Anibal Godoy hired to redesign the search strategy. “From a long distance it is perceived the bad smell of corpses,” said Rafael Maradiaga, who works at the site.

Chile sent two rescue workers who participated in the rescue of 33 miners in the Atacama desert four years ago, and an adviser of the Ministry of Interior in emergencies, to support the rescue efforts.