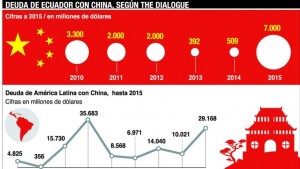 China is the largest creditor of Ecuador. International organizations, national observatories and the Government differ, however, in the overall amount of the debt.

The international consulting firm The Dialogue has the highest figure. According to its calculations, which include oil presales and financing for specific works until last year, they account for a debt of 15,200 million dollars. Eximbank of China is the main lender for projects such as the Coca Codo Sinclair hydroelectric plant, which should have started operations in February, and the 2015 Annual Investment Plan.

The Dialogue, which features the participation of national experts as Ecuadorian former president Osvaldo Hurtado, emphasizes that 2015 was the year of highest procurement of works; 7,000 million, claims its latest study, were signed in that year.

According to the February report of the Undersecretariat of Public Finance, which does not include oil presales or funding for some projects, the total public debt amounted to 34,343 million dollars. Of this amount, 6,394.6 million relate to bilateral loans from China, 18.6% of the total.

Tax collection moves away from the government’s goals