The Chinese ambassador in Quito, Chen Gouyou, announced yesterday that his government will encourage and support his country’s pharmaceutical companies to cooperate with Ecuadorian companies and jointly produce COVID-19 vaccines in Ecuador for the Andean region. 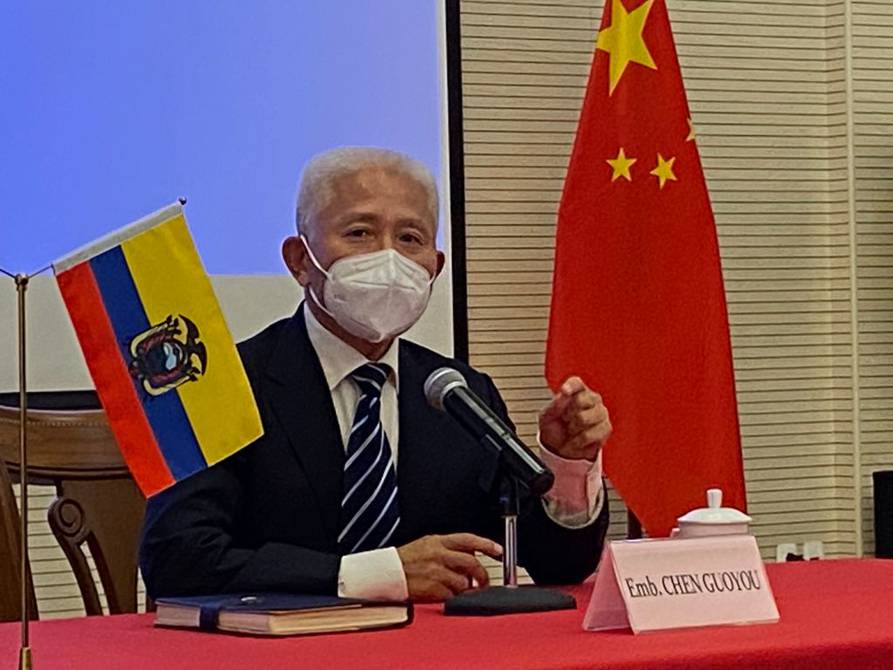 In a press conference that lasted more than an hour and a half, and with simultaneous translation, the ambassador highlighted the positive signals sent by President Guillermo Lasso to deepen relations with China. He mentioned various messages and conversations between Lasso and leader Xi Jinping, especially the one they had last Monday.

Chen spoke about the anti-epidemic cooperation that China has provided to various countries. In the case of Ecuador, he assured that his Government will support this “joint production.” “It doesn’t matter if it’s CanSino, Sinovac or Sinopharm; if the pharmaceutical companies have the desire to deepen this type of cooperation, the Government will give the support ”, he said.

He stressed that the contribution of the Chinese Government, which amounts to 13.7 million vaccines, was “vital” for President Lasso to achieve his vaccination plan, and announced that 5 million additional vaccines have been committed. He relived the strategic cooperation between China and Ecuador with a view to overcoming ideology. The alliance with China has generated employment and development, he said.

He revealed that another of the points discussed in the conversation was the issue of Ecuador’s foreign debt with China, but did not cite amounts. He noted that the financial institutions of both countries would meet shortly to “reach a consensus.” President Lasso, he said, has asked to improve the debt structure to reach a solution, and President Xi “has given an active response to the proposals … The Chinese side attaches great importance to deepening financial cooperation and improving the structure of Debt”.

During his speech, the diplomat also highlighted President Lasso’s openness to build a more favorable environment for companies, safeguard security and their legitimate rights, including Chinese companies. For this reason, he highlighted the importance of signing a free trade agreement: “China wants to work in the same direction with Ecuador to sign a high-quality free trade agreement as soon as possible to promote investment and trade.”

Finally, he reiterated China’s willingness to respect the legislation on fishing in international waters and non-interference in the exclusive economic zone of Galapagos. He insisted on the Chinese policy of zero tolerance in this regard, and the three-month moratorium, between September and November, in the area west of the islands for the renewal of resources. He described the ships’ monitoring system as rigorous, since they must report their position every hour. (I)