Chinese loan will finance works of the public sector 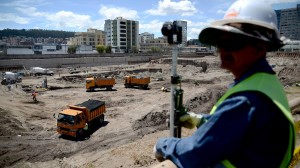 Yesterday the government and the Chinese embassy announced the construction of the Government Financial Platform (complex of buildings for the public sector), which will cost $ 197.9 million.

The mega-project, whose construction began in September 2015, will be completed in December 2016, reported yesterday Salvador Jaramillo, director general of the Procurement Service (Secob for its Spanish acronym).

The Coordinator Minister of Economic Policy, Patricio Rivera, explained that despite the difficult economic climate, “the economic activity must be ensured through adequately funded works.”

Wang Yulin, Chinese ambassador to the country, said that Ecuador has become one of the top destinations in the financing and procurement market of China. “The relationship is at its best,” he added.