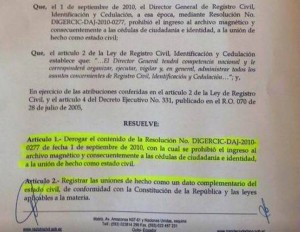 From September 15 facto unions will be recognized in the Registry as a civil status option on the identity card of Ecuadorians.

The General Directorate of Civil Registry and Identification, issued on Friday Resolution 0174, which accepted the amendment.

Representatives of the GLBTI community had a lunch with President Rafael Correa on Monday. In this meeting, they requested  the President for their constitutional rights to be respected, among which was the non-registration of unions.

“It’s a big step,” said the President of the X Silhouette Association, Diane Rodriguez. “It makes us feel, now, citizens, we can form our unions and legalize them”.

The Equal Civil Marriage group, said that this would be a “huge step forward”, but they will continue to fight for the “other debts of the Citizen Revolution with the LGBTI populations”.