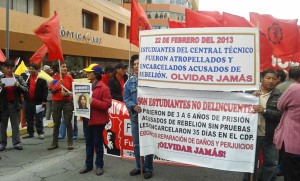 Taxes, rising fares, gas, reelection, amendments and the Labour Code were the various claims among those who on November 19,expressed on the streets of at least six cities of Ecuador.

At the highest concentration, which was in Quito, unions, indigenous, doctors, women, students walked for nearly two hours untilgetting to the San Francisco square, to the stage with the banner that convened all to the “Unit class against government reforms.”

The march organized by the United Workers Front (FUT for its Spanish acronym) was peaceful and had the custody of a large group of cops on its tour throughout the north and center of the capital.

The marchers covered about ten blocks, while the first people arrived to this square, the latter reached San Blas. Among them were:the assemblymembers Lourdes Tibán and Magaly Orellana; Alberto Acosta, former president of the Constituent; the former ministers Gustavo Larrea and Diego Borja.

Supercom will submit specific sanctions to the Communications Law reforms