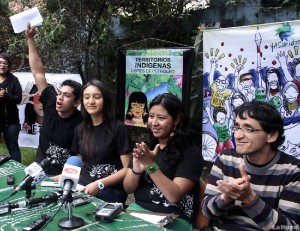 On November 18th, the Yasunidos group submitted a report with observations on oil exploration of the blocks 41 and 31, within the Yasuni National Park.

At a press conference, members of the group requested that the Commission on Biodiversity of the Assembly, which is responsible for monitoring the operation in the area, calls the Minister of Environment, Lorena Tapia, and a representative of Petroamazonas.

According to the activists, there are critical points in the scope of the environmental impact report, so it is necessary thatgovernment officials explain.

They point out that there are concerns about the construction of nature trails, as well as the pipes that are supposed to be underground and the Protection Protocol for people in voluntary isolation in the area.