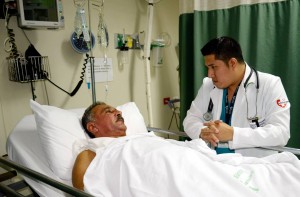 Concerned with finding a solution, service providers met yesterday with Felipe Pezo, employers’ delegate to the Directive Council of the IESS, to whom they expressed their concerns and raised several proposals. These will be announced tomorrow at the scheduled meeting with Richard Espinosa, director general of the IESS.

Roberto Gilbert Febres-Cordero, director of the Guayaquil Clinic, said that one of the proposals is a credit note in order to continue to providing services for at least the next three months.

He added that they require to pay salary arrears to suppliers. “Medical emergencies can´t wait (…). The labor force of doctors will always be free, but we can´t work if we have no supplies … ”

Gilbert considers that the meeting in Quito is important because this debt could be relieved depending on its results may..

Ecuadorian shrimp in pursuit of the third place