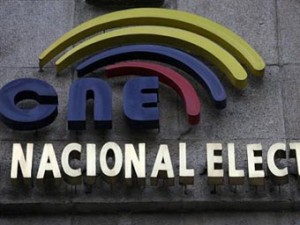 The plenum of the National Electoral Council (CNE) will make the delivery of forms required by the Group YASunidos to carry out  the signature collection needed to call for a referendum to stop the exploitation of oil in the Yasuni.

However, that alone may be provided in case that the plenary approve the reforms to the regulation of popular consultations and citizen initiatives, which was ruled by the Constitutional Court (CC).

Domingo Paredes, President of the CNE, said that today is the deadline to approve the amendments to this regulation, and the changes may be notified to the collective and its representative Julio Cesar Trujillo.

The resolution of the CNE was based on two opinions issued by the CC, which are related to the request for a referendum supported by the former assambly member ,Galo Lara in 2010, and the recent one, promoted by Trujillo.

The CNE should  sent to the Constitutional Court the favourable report of  the fulfillment of democratic legitimation in observance to the provisions of article 104 of the Constitution, attached to the request of consultation.

Meanwhile, the CNE said that the opinions of the CC must be met immediately, that is why it was ordered  to the national technical Directorate of electoral processes and political participation to design the form for the collection of signatures.

The spokeswoman of the collective, Estephania Mantilla, asserted that the organization have the ability to collect, nationwide, 584.116 signatures to call for a referendum.